According to the new report “The Challenges Facing Agriculture and the Plant Science Industry in the EU”, the EU’s political environment and related regulatory decisions have led to reduced access to modern agricultural tools, including plant biotechnology and crop protection products, putting pressure on agricultural productivity and an increasing reliance on imports. The report notes the number of crop protection tools available to EU farmers has decreased significantly in recent years in contrast to other countries, while there continues to be a de facto ban across much of the region on the cultivation of GM crops.

As noted in the press release published by associations representing the plant science industry, the data in the report should be a wakeup call to European politicians and regulators. In the face of climate change, increasing populations and the need to protect the environment, farmers need access to cutting-edge innovations.

Beat Spaeth, Director Green Biotechnology at EuropaBio, said: “Whilst the EU remains reliant on other parts of the world for imported GM crops, it is effectively preventing itself from developing and applying the same tools inside its own territory. Perhaps even more worrying, needed approvals of imported GM crops are often delayed by the EU’s extraordinarily lengthy and sometimes scientifically unjustified assessment procedures. In addition to speeding up Europe’s status as a “museum of agriculture”, this predicament endangers the global trade balance with knock-on effects for EU farmers and consumers. Change is urgently needed to remediate this, so that Europe can contribute more substantially to improving food security.” 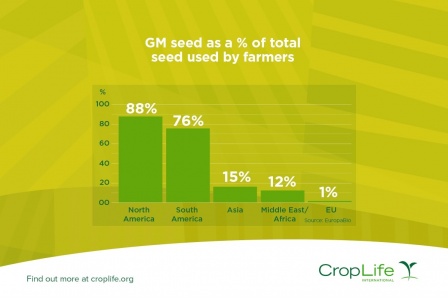