As reported in a press release issued yesterday by Fundacion Antama, farmers in Spain and Portugal have been growing Bt maize for over 20 years, in order to defend the crop from severe losses caused by boring beetles that have been plaguing certain areas of the Iberian Peninsula for years.

A new report published in GM Crops & Food magazine, ‘Twenty-one years of using insect resistant (GM) maize in Spain and Portugal: farm-level economic and environmental contributions’, shows that since 1998 Bt maize farming has enabled Spanish and Portuguese farmers to boost production by 1.89 million tons compared to conventional farming, whilst using fewer resources, like water, and helping to reduce the pressure on surrounding lands. In fact, to achieve these levels of production with conventional maize, it would have been necessary to cultivate an additional agricultural area of 15,240 hectares in the two countries, requiring an additional 1.042 million m³ of irrigation water. The GM maize has also reduced spraying of insecticide by 37%, also reducing the impact of herbicides and pesticides by over 20%.

In addition to substantial environmental benefits verified by the report, the report also shows that farmers have also benefited greatly. For every extra euro spent on purchasing GM insect resistant seed, farmers obtained €4.95 in additional income compared to conventional farming. Improved yields and reduced production costs resulted in an average increase in farmers’ income of €173 per hectare, driving the rural economies of both countries.

Unfortunately, as noted in Business Maverick, strong GMO opponents are often “unmoved by the facts”, despite overwhelming evidence that GM maize has improved yields and even significantly lowered levels of mycotoxins compared to non-GM maize.  Fortunately, more recent research finds that increased knowledge about GM technology can lead to more positive attitudes.

Bt maize farming has enabled additional production of 1.89 million tons of maize between 1998 and 2018 in Spain and Portugal 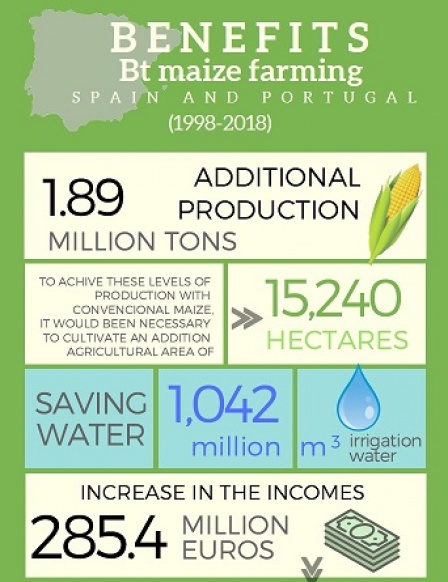